The Fine Line Between a Christian and a Missionary 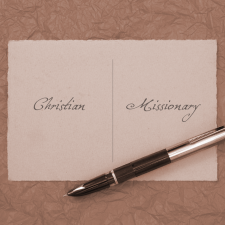 There is a fine line between being a Christian and being a Missionary!

Before explaining what I mean, let me ask you a question. What is a missionary? If you could define the word “missionary” in one paragraph, what would you say a missionary is? Think realistically. Who do we call a missionary?

My guess would be that you defined it as someone who takes the the message of Jesus to other people. Some will define it by distance, while others will say anyone who takes the message of the Gospel to another person is a missionary. Some would say that the word missionary is not found in the Bible. They may say it is the modern day evangelist from the Bible. A few may define it as a modern day apostle.

My response would be, YES! Though there may be some differences in the details of the definition, the basic idea is the same. A missionary is one who takes the Gospel of Jesus to people who need to hear it. Most of the time we consider a missionary to be one who leaves his home and takes the message to a foreign land or to a specific group of people.

With this in mind, we can move on to asking, “What is a Christian?” This is where I believe the biggest mistake is! Our definition of a missionary is normally quite accurate and fairly close to the expected. However, the modern day definition of a Christian can vary to all extremes. So how would you define a Christian. Take a moment and think it through. Maybe we should specify that we are speaking of the same kind of person as Luke mentioned in Acts 11:26 when he says, “…the disciples were called Christians first in Antioch.” We are speaking of disciples of Jesus Christ.

In the day and age in which we live, people have become very informed. We have too much information! The internet provides for us information far beyond our local researching capabilities. Many times we quickly type in the desired query and believe what we find stated on the first few pages. We rarely go as far as verifying the details. We may compare with another website to see if someone else is saying the same thing, but our research though much more speedy can often be inaccurate.

I am afraid we have pulled this same stunt in our own personal beliefs. Our beliefs are based on what others are saying or on what is popular, but they are many times not based on the Bible. We need to check out the facts and compare our beliefs to the Bible. Many times we define our beliefs in a way that justifies our weaknesses.

Let us return to the second question and rephrase it. What is the Bible definition for a Christian? Have you ever looked it up? According to the verse given above a Christian is clearly a disciple. Then, what is a disciple of Jesus Christ?

When we study the Bible we will find that there is a fine line between what we call a missionary and what we call a Christian or disciple. There is very little difference. According to some definitions the only difference may be a geographical location.

A quick glance at passages that use the word “disciple” will give you three simple answers as to what a disciple is.

Luke 14 explains to us some qualifications for a disciple. Read the passage and you will find out a few more things about a disciple.

“If any man come to me, and hate not his father, and mother, and wife, and children, and brethren, and sisters, yea, and his own life also, he cannot be my disciple. And whosoever doth not bear his cross, and come after me, cannot be my disciple. For which of you, intending to build a tower, sitteth not down first, and counteth the cost, whether he have sufficient to finish it? Lest haply, after he hath laid the foundation, and is not able to finish it, all that behold it begin to mock him, Saying, This man began to build, and was not able to finish. Or what king, going to make war against another king, sitteth not down first, and consulteth whether he be able with ten thousand to meet him that cometh against him with twenty thousand? Or else, while the other is yet a great way off, he sendeth an ambassage, and desireth conditions of peace. So likewise, whosoever he be of you that forsaketh not all that he hath, he cannot be my disciple. Salt is good: but if the salt have lost his savour, wherewith shall it be seasoned? It is neither fit for the land, nor yet for the dunghill; but men cast it out. He that hath ears to hear, let him hear.”

Here are a few simple observations.

Through various passages we find that a disciple is salt and light in this world. Christ intended for the disciples to spread the news. The command is given time and time again to the disciples. “Go! Preach! Teach!”

Why do I make this observation? This observation is the result of looking around and wondering where the laborers are. How many people do you know that say they are Christians? How many of them are actively playing the role of a disciple?

Perhaps we should not ask about those around us. We should simply look at our own lives a take the test for ourselves. Am I a Christian?

Have you tried to distance these two terms to justify your own actions? Have you idolized missionaries as heroes when they are simply obeying what Christ commanded all of His followers to do? Please do not make this fine line any thicker than it needs to be! Jesus wants every believer to be a laborer!

Romans 13:11-12 “And that, knowing the time, that now it is high time to awake out of sleep: for now is our salvation nearer than when we believed. The night is far spent, the day is at hand: let us therefore cast off the works of darkness, and let us put on the armour of light.”

Luke 10:2 “Therefore said he unto them, The harvest truly is great, but the labourers are few: pray ye therefore the Lord of the harvest, that he would send forth labourers into his harvest.”

Welcome to our website. I hope you find what you are looking for. If not, just drop us a note on the contact page.